Travel back from whence you came and take your elixirs with you... 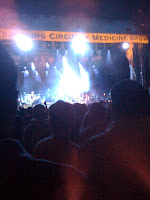 If you can't trust the wind, who can you trust?
If you can't love sin, who can you love?
If I begin will you let me finish up?
If I fell down would you pick me up?
If I don't drink from a silver cup, like you,
Would you say so long, farewell, and good luck?

I got free tickets to the Traveling Circus and Medicine Show from my brother. TLO had been angling on going to this show for what felt like weeks. (It wasn't...) I have always wanted to see Counting Crows live, and this was my chance. But two things kept holding me back. One, the way-too-pricey ticket, and two, the fact I had seen enough youtube videos of live shows, and read enough reviews about the same shows to fear that it would be a lot of money for a shitty performance. Maybe you have heard the same things? Maybe you have seen Counting Crows live? Here is the skinny on what is wrong about Counting Crows live. This will be tough to keep short, but I will try. Adam Duritz is an overly affected douche bag who whines a lot, talks too much between AND during songs, and has reworked all our favorite songs from August And Everything After and Recovering The Satellites. What I mean by reworked is ruined. You've been singing along to Mr. Jones and Angels Of The Silences for 10 years. You love these songs. They have meaning to you. You think you duet quite nicely with Adam.../cough

Adam doesn't give a fuck about you. He is tired of these same songs. He makes it impossible to sing, or even enjoy the songs. All Adam cares about is Adam and the hot girl in the black dress he wants to poke. SAVE YOUR MONEY AND DON'T SEE THEM LIVE!

Thankfully I only spent a couple bucks on drinks, otherwise I would have thrown my Corona bottle at Adam. (He would have been fine; I am sure his ego deflects things like that.) 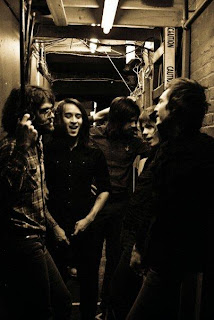 The saving grace besides the free tickets was the band Augustana. The music was fantastic and the frontman was likable. He has a distinctive voice that catches your attention and holds it. Sadly the lead singer, Dan Layus, kept minimizing the band by saying things like "Don't worry, we are almost done and Adam will be back." This is just unnecessary and makes the crowd uncomfortable. If the crowd is liking your set, which they will (and did), there is no need to apologize.

The other problem was the format of the entire concert. I'll let Affected Adam explain:

I know you’re all used to showing up at 8:30 or 9PM for concerts that started at 7. It’s understandable. You’re there to see YOUR band and you’re showing up when you think they’re gonna play, right? Well, starting on Thursday July 16th at Marymoor Amphitheatre in Redmond, Washington, that’s all going to change.

Ladies and Gentlemen, at 7:15PM, when the curtain goes up on The Saturday Night Rebel Rockers Traveling Circus & Medicine Show, Augustana AND Counting Crows are all going to be walking out onstage together and that show is going to start with EVERY SINGLE ONE OF US onstage singing and playing our brains out. We’ll do a few songs together and then it may be Counting Crows that plays the first set alone. I don’t know exactly how the shows going to run every night. It’ll definitely be different a few days later in Friant, CA when Michael Franti & Spearhead join up. It’ll probably be different every night. The only thing I know for sure is that EVERY show on this tour is going to start with EVERYONE onstage together and we’re going to all be running on & off stage all night playing on each others songs and playing songs all together and basically just playing whenever we feel like playing. So you get my point, right?

That means is that all the bands collaborate on each others' sets. Which means I had to endure Adam through some of Augustana's set. One of the other artists on the ticket couldn't make this particular show, so at least I didn't have to watch him ruin Michael Franti's songs too.

Before the show I had spent some time getting to know Augutana's songs. All likeable, but nothing jumped out at me. It wasn't until I heard the band live that I found some songs to love. Augustana sold me with the song "Dust" that they played about half way through their set. You may have noticed the lyrics scattered throughout this post. It's a strong song that grabs you and demands attention. I love the lyrics, the music, the harmonizing. It's just great. This song was worth the trip. In fact I bought the album the next morning and have played it over and over. Singing it over and over and over.

That's also what we want to do at your live shows. Sing along. Remember that Adam. Cuz I believed in Adam/But he don't sing anymore

If a man can't lie, how can he speak?
If the sun don't rise, would the moon be out of reach?
If I came home, would you get down on your knees?

I bought Can't Love, Can't Hurt and I think you should too!

I am really disappointed to hear Counting Crows sucked live! I too have always wanted to see them, but now I will probably skip it! I like Augustana and I am glad to hear they were good live.