Ghosts of old loves are blowing in the pines 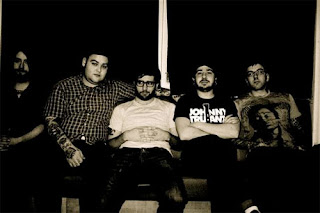 Alexisonfire is all growed up. Unfortunately, I forgot to add their older albums in my iTunes rebuild, so I can't prove it to you. But they released their fourth full-length album, Old Crows/Young Cardinals, just a couple of weeks ago and in it I can hear mature sounds ranging from hardcore punk to newcore screamo.

I even hear a bit of Tiger Army in there somewhere. That's a compliment. While these boys did hit the scene kicking ass and taking names, they've only gotten stronger in the 8 years since the band formed. And it seems that rather than being influenced and inspired by bands they've toured with, it seems that they've taken something else from all the touring they've done.

In an interview with CHARTattack: "I think the big thing influencing myself and Dallas when we were getting off the road was having played a lot and done some touring with some bands that we didn't like," says guitarist/vocalist MacNeil. "We knew what we didn't want and what we wanted to distance ourselves from, and that became equally important as what we were trying to get to."

Apparently this continues even as they attack every date on Warped this summer. On their own tour blog, they say:

I'd say the most surprising thing about this tour is the amount of bands that are faking it. Straight up lip-syncing nonsense!
To begin with Millionaires don't sing at all, and the one dude from brokeNCYDE is up there just pretending. I digress...........

Track 2, "Young Cardinals", is the song I would say shows just how serious they are, and it's one of the strongest on the album in my opinion. In fact, it blows me the fuck away.

The boys do have some good words for other acts on Warped Tour. The Gallows, a band on new dad Brett Gurewitz's Epitaph label, reportedly "play harder than everybody everyday". Rapper POS carries himself "like he is fronting for a punk band." Of course they're going to have kind words for Antiflag, since they've toured the world with them and even sing on their record. Last but not least they cite hometown boy Shad because, well, you've got to back up your brothers. So check out these four and maybe watch for us to talk more about them in an upcoming podcast. You are subscribed to the podcast aren't you?

One more song for your listening pleasure. I like "No Rest" as well. I think it showcases their expertise on their tools and equipment. The lyrics aren't terribly inspired, and you know what a lyric snob I am... But the execution of this track is impeccable so I am letting it slide.

Check out Warped Tour this summer if you can. The day-long festival has barely gotten started, so you have no excuse not to find a show near you (if you're anywhere in the contiguous yoo-nited states that is - or in Quebec tomorrow). And get in on one of these massive circle pits that Alexisonfire inspires.

I saw Alexisonfire at Warped. Cool band. He's right about the lip singing.

Ian, thanks for the report! Glad to have you as a reader. :)