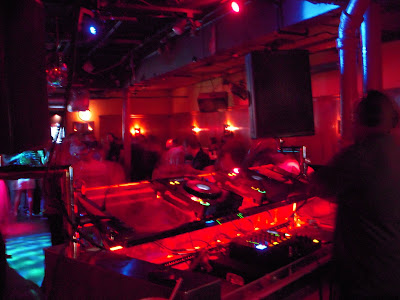 Okay, this is the special treat I've worked so hard to get. Just this past Friday, Chicago house legend Derrick Carter graced Boston again. One of my good friends, Randy DeShaies, booked Derrick just two weeks prior to the event, so this was a simple slap in the face to wake me up and make me go dance - which I rarely do. I've wanted to get an interview with Derrick for years, now. That started while still helping George with the Vegas website we co-owned earlier in the decade. The blog gave me a new opportunity, and after really being persistent? Derrick obliged.

So after the show Friday, July 10th, he gave me a few minutes to discuss his views and be his usual jovial joker self. The conversation started with a lot of joking, and with Derrick outing his pal Mark Farina - jokingly - via the use of his iPhone. The text he read from it, as Derrick says, has Farina saying, "I was going to pee in Boston Friday, and looked up, and saw your big head staring at me!" Definitely only something the BFFs could share. And most definitely get a laugh out of me.

Eventually, we briefly discussed his discography, where he made note that he really doesn't have a favorite record, per se. "I don't have one of those moments where everything culminates," Carter states. He continued by saying he's "more evolutionary than revolutionary." 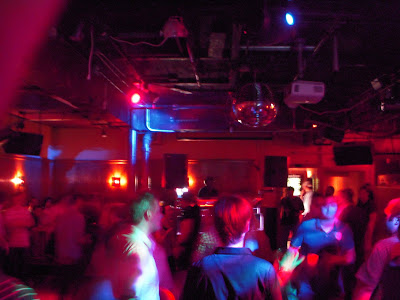 This makes sense to anyone in the game as long as he's been in it. People simply do need to evolve in order to survive the game, and his statements re-affirm that. As he continued, "I'm just trying to find a spot where everything works out, and it's all good."

When asked about putting on a show for the folks that come out to see him, he sort of shirked when I made mention of a quote that Erick Morillo gave me, but it still holds true. All those years ago, he told me that he simply knew people paid to see a show, so he wanted to try to put one on. While this may have changed with Morillo? The statement did speak volumes, and Derrick's take was a bit more verbose and insightful.

"When you get that sort of platform," he begins, "and you're able to do things with people watching, and you're charged with presenting people with a good time? That's my situation." And despite it being a different city on countless nights? "I'm here. This is not my home, but whatever. We're trying to have a good time, so let's do it."

When finally asked about any new projects, he was vague about a new one, but the reasons are simply put by the Chicago legend. "I've got an album I'm working on, but I don't have a whole lot of....'This is some secret shit!' or have a insight into any of it."

Despite the brevity of the interview, I felt incredibly lucky to be able to pick his brain with even what sounds like basic questions. Then again, it's not every day I can spend talking to someone that helped influence how I DJ'ed.

Seriously? Go see this man play. You won't be disappointed! This week, there are no MP3s posted, but I have left a link where many of the man's live mixes are posted up online. Click here to check out these mixes.

And take the time to go buy his stuff! Now!