Every shadow filled up with doubt...

From a WIKI article:

Following the creation of synthetic blood, vampires have progressed from legendary monsters to fellow citizens overnight. Sookie Stackhouse (Anna Paquin) is a telepath and waitress at Merlotte's in the small Louisiana town of Bon Temps, owned by Sam Merlotte (Sam Trammell), a shapeshifter—though this secret is kept hidden. One night, Sookie meets Bill Compton (Stephen Moyer), a handsome 173-year-old vampire who has returned to Bon Temps following the death of his last remaining relative. As she cannot hear his thoughts, she finds it easy to be in his company and over the first season, the two become romantically involved.

I was given the first season of True Blood to check out, and I watched the entire season, 12 episodes, in a 24 hour period. I am not really into this new adoration America has of all things Vampire, but this show had enough shock, humor, sex, addiction, mystery to keep me changing DVD discs... one after another.

It always comes back to music though, and the music picked for this show was top notch. In fact, when I watched the opening credits, I knew they had the fish hook deep in my cheek.

The music is from Jace Everett, a country singer from Indiana. When I heard that song along with the images of the deep south sprinkled with liberal amounts of sex, violence, and religion that make up the opening credits of the show, I pressed pause and ran to the laptop to look up the info on that song! I also found out that the company that put together that intro is called Digital Kitchen. "The whore in the house of prayer" is the theme Digital Kitchen chose to explore in the opening title sequence, highlighting redemption and forgiveness.

The show used some great music throughout the show, especially artists from Louisiana. Some of the artists featured include The Flying Burrito Brothers, Little Big Town, and Cobra Verde. They compiled some of the best tracks on the soundtrack for Season One, I suggest picking it up.

HBO used some interesting techniques to market the show, including some very clever viral marketing. 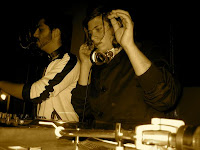 While doing some research for this post, I came across a kick ass remix of Bad Things by DJ duo Pirate Stereo. Pirate Stereo is made up of two Bostonian's, Isaac Safdeye and Eyal Agai. They have some of their work up on MySpace. Please go check them out and tell them Mookie from inALLcaps sent you.


I don't have HBO at the moment, but in the meantime I can still watch Season Two which came out a few weeks ago. You just have to know where to look. I'll still be buying the Season Two DVD when it comes out, because if the second season DVD is anything like the first, the extras will likely make it worth it!