The canary sings with such particular instruction

everybody runs when the telephone rings but nobody's making a call


Their second EP, Bridges and Tunnels, came out last October. They've spent a lot of time playing gigs in bars where they weren't even old enough to be in the audience. And they've been compared no less than eighty-four times to The Strokes. 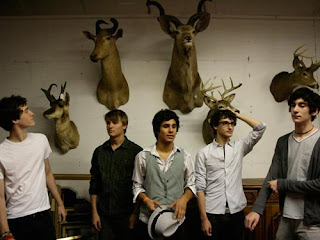 The Strokes? What the hell? I don't hear it. Odd coincidence that I just this week started listening to Gaslight Anthem again, because that's who I would compare them to if you made me. Or The Offspring.

Haha. Caught you there. No, really. Because I am so batshit bonkers for The Offspring, I can hear an indie interpretation of the opening to "Half-Truism" in Static Jacks'"Resistance/Self-Control." Go ahead, tell me I'm wrong.

There is something that makes me so happy in the music on this EP. I can't put my finger on it; could it be the line give up on hope, cast out your dreams? I feel like I am back in SoCo Dabbs' bedroom being schooled on The Violent Femmes and Morrissey and listening to the way he pronounced Ralph Lauren as if it were an Italian name. I could be thirteen again, trying to decide if I was the preppie with high bangs or the skater chick with an asymmetrical style. I've always been a triberunner, it's true.

I want you to take a listen to "Wine Cellar."

I love it. The boys at Static Jacks may have given us the latest EP for free, but I became and instant fan and bought the previous one, Sonny Halliday straight away. Now I'm going to ask Daddy if we can finally start a label, because the next one they record needs to have better sound quality.

Uh oh, we better hurry, because the Jacks' guitar player Henry tells me they're recording it now and it should be out this fall. They are releasing their stuff via RCRD LBL, the online label/blog network.

In the meantime, here is a remix of a song I've been singing all day. At least in the remix the vocals have a chance to shine.

Have I dispelled any conception that these guys sound like The Strokes? I still don't get that association. Did the guy who said that just have them next to each other in his iTunes? Because Stevie Ray Vaughn follows them in mine. And speaking of shining, I am really appreciating the guitar licks in this track off the old EP. Not that I'm making a comparison... But... Check out The Canary Sings.

There you have it. Between The Static Jacks and Middle Distance Runner, I am really thankful that we started this blog because I love that I was able to discover bands like these and share them with you. I would say those are my two favorite finds of the past year.

So make me happy and buy these EPs. And if you're in New England, go catch a show. I wish I could be there. I bet they are absolutely loverly to see live. They're in NYC, DC, PHL, and some Conn/Mass too. Tell me how the shows are!! That's an order!

No Amazon links for you this time... Just go straight to iTunes and nab some indie delights. And picture The Little One floating through the office during the day singing I see the fire on the bridge and in the tunnel below...
Posted by The Little One at 4:51 AM