So What Are You Waitin' For?

Nature is a curse we fight

You're awake, and it's the middle of the night. Awake isn't even the right term. Wired. Alert. Restless. Sleepless. It's time to start messing around with GarageBand, Reason, Anvil, FlexiMusic, or whatever your program du jour may be. Perhaps you can get your song on a teen heartthrob television show and tour with Paramore, like the folks at Paper Route.

It's true: In essence, this is how the Nashville, Tennessee band got its start. By messing around on the laptop, and creating music. It doesn't hurt to have the talent for crafting intelligent lyrics to support your synth beats and grooves. 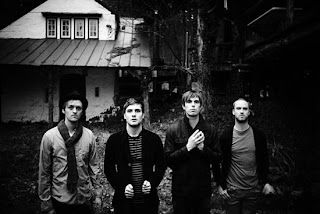 They've toured with Paramore, have just barely finished their tour with Copeland, and will head out with Bright Eyes next week. Not bad for such humble beginnings!

Go ahead and take a listen to both Tracks 5 and 6 from their first album released by a major label, Absence, which just dropped this week. Check out Tiger Teeth and Be Healed:

I can easily say I'm impressed with the boys in Paper Route. Electronica definitely has a soul, and they daftly expose it, especially with these middle tracks in the album. What they do with it is make it translatable and relatable... It's not necessary to be heartsick, heartbroken, apathetic, or angry to feel like the songs are made for you.

Check below and buy an album. Maybe it will inspire you to invite the neighbors over for an iMac hoedown and start a band of your own!

Good post. Good tunes. Thanks for introducing me to the band, TLO.