Friends since childhood in Paris.

Come 1996, one group becomes Daft Punk, and the other becomes Phoenix.

Come 2009, no one has not heard of Daft Punk, but have you ever heard of Phoenix? They both have a handful of studio albums under their belt. Only one got the Grammies and the headlining gigs though. Phoenix is currently on tour to support the upcoming album, and It looks like the London, Holland, Paris, and Berlin shows are sold out. So there is that. And someone in the US has obviously heard of them: Chicago, NYC and DC have sold out as well. You can check them out if you're planning to hit Bonnaroo. 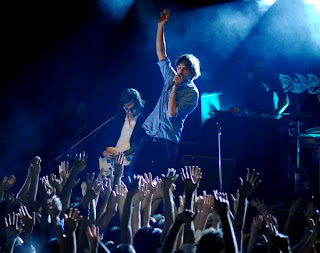 If you were planning to skip all summer festivals because you assume that we your loyal music servants will report on them fully, you need to start contributing to our event fund. Because I don't know if you've looked out the window lately, but there's a recession out there. We do what we can. So, with that said... You'll be at Bonnaroo right? Let us know how it is. They will also be at Austin City Limits in October, so if you've been a good little boy or girl and you've made your contribs, then we will go to that and tell you all about it. Hell, technically it seems to me like they are free during Outside Lands, so maybe we'll see their name added to the lineup.

The new album hits US shelves on Tuesday. They previewed a few tracks from Wolfgang Amadeus Phoenix when they appeared on SNL back in April. Check out Track 1, Lisztomania, here:

Another new song they shared is called 1901. How about a remixed version? In this Ivan Beck Redub, this track is stretched out a bit and transformed into the island version. Check it out:

The tracks on Wolfgang Amadeus Phoenix do sound more full, more developed and mature, than earlier work that I've been able to sample. 2004's Alphabetical reminds me of Just Jack, whom I just love all the same. In fact, if you challenged me, I might guess that just about any of the tracks off the earlier album belonged to Mr. Jack. Check out "Everything is Everything" from Alphabetical.


This year's album manages to remain upbeat without chewing too much bubble gum, but don't get me wrong... You could still catch me prancing home from the pool as if leading my own parade if I had this playing in the earbuds. (Never mind that I've got to get that remix loaded into the Pod too!) Oh, you didn't hear about my parade? Yeah. You need to listen to the podcast, my friend. You can click that icon on the right of this blog page, or you can follow this link.

And the easiest way to start making your contributions to the bloggers you love the most is by compriando algo aqui:

Or you can just buy me something. I take a Small.
Posted by The Little One at 2:07 AM

WOOO! I LOVE Phoenix. I was so psyched when i heard 1901. I never knew they've been around since 96. I'm one of those guys (or at least used to be) that was always excited to be one of the first to hear a new band that is about to break through. But now I know they're hardly new at all.

Is it just me or does the singer sound a little similar to that weirdo vocalist from Saves the Day?