Modest Mouse? I'm mad at you.

For one, their last album was just not that great. The fanboys a couple years back were SO FUCKING ANNOYING.

"Oh my god! They got Johnny Marr! YES! HE WILL MAKE THEM THE GREATEST BAND EVAR!" 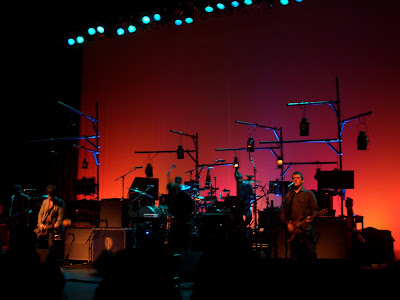 Umm. No. He won't. Even more annoying was the group of dipshits after the last show I saw them play talking about how they "weren't very good" because they played too much "old stuff." WTF? Are you fucking kidding me? Go back to finding whatever band is hot on top 40 next, you weak-minded piece of garbage. Yeah, I hear Kelly Clarkson is going indie. Why don't you jump on her? You're not jumping any other girl right now, anyhow. Here's a tip. Spend more time on social skills and less time nitpicking music you don't fucking know.

Anyways, they were great live. Have been the three times I've seen them. Isaac Brock is a weird, weird dude, btw. First couple of times I saw them was before Good News.... made them over the top huge. So seeing them play older stuff, like "Doin' The Cockroach" made me quite happy. I've included a pic I took at the show here in Boston a couple years back, also. Which brings me to why I'm pissed with them. They didn't come here on their last tour. How the fuck do you NOT come to Boston?

Anyways, here's "Doin' The Cockroach" as well as a live version. As you were.

So stop being pretentious and go buy this stuff. No one cares if you're a brooding emo kid. You have money. Now spend it, you tightwad!

I've seen them twice, once long ago and once recently, and one of the saddest things was that they played almost no old songs the last time. Glad to hear they're playing some old stuff (and FWIW, I liked the last album, not so much Good News..., but their early stuff was fucking transcendental awesome)