I was chatting with TLO on my way home from the office Wednesday. She was talking about how she had recently gotten a few CDs from a friend that was returning the favor after she turned him on to Four Year Strong, Bayside, and Meg and Dia. Apparently he fell head over heels about those bands, and that's the payoff my friends. This is why we even put in the blood sweat and tears into this very blog. We love that feeling when someone falls in love with a band that we told them about.

Back to the story...

I asked her, "Well...what are you gonna hook him on next?" She replied, "I tried a few other bands, but they fell short for him. No one else sounds like FYS and Bayside." Well... I HAD to agree.

Even after what I am about to share this week, the statement is still true. No band sounds like Bayside. There will never be another band like Four Year Strong.

You could find "Band B" that happens to have all the same things you like about "Band A".

Pandora, specifically, uses the technology provided by the Music Genome Project. In a nutshell, it takes characteristics of a band/song and matches it with bands/songs that have similar characteristics within a certain range of difference. Like if a band has a male singer that writes emo-type lyrics usually in a minor key, it will recommend other songs that have male singers that also have emo-ish lyrics in minor keys. The characteristics that make up a song are known as its genome. Musicians analyze songs to put together these characteristics, which make it a little more scientific than some punk kid saying simply: "They sound just like the Foo Fighters."

To best describe all that Pandora is, I created two stations. One based on Bayside and one based on Four Year Strong.

The first one is Bayside.

Bayside Station
Pandora selected many great bands and songs for my Bayside station, most notably Taking Back Sunday and the song My Blue Heaven. Why TBS? Well, its genome similarities to Bayside are:

I like Taking Back Sunday, but in my opinion, Bayside is far better, deeper, and more profound than TBS. I definitely don't mind it showing up in my Bayside Radio playlist though!

Now, let's see how Pandora does with Four Year Strong. 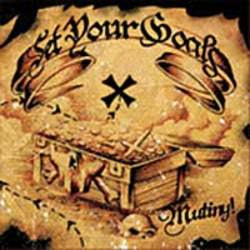 One of the first recommendations was a band called Set Your Goals and their song Mutiny.

[Download Set Your Goals - Mutiny]
Here are the characteristics that make this a good recommendation based on Four Year Strong:

I love this band on first listen! Enough to go to Amazon and buy it! The best part was that I had never heard of Set Your Goals before Pandora suggested them! [edit by TLO: I did. They are actually touring with Bayside right now. But they were also on the lineup for a Big D And The Kids Table show that we ended up skipping quite a long time ago. LOL] Mission accomplished! Maybe Pandora will help you find some new music? The one thing is that you might miss more cutting-edge indie bands by just relying on Pandora and the Music Genome Project, so you better bookmark inALLcaps.com just to make sure you don't miss something amazing!

Pandora introduced me to many bands that I love now! I have never tried the Genius from Itunes, but might have to check it out. I also never knew you could rate the songs on your ipod/itunes until I heard it on the podcast when you guys were talking about it.