Glorified version of a...

I am taking The Little One to the San Francisco Outside Lands music and art festival.

I've been thinking about this festival a lot, and decided to throw a post together about it. Share some info about the festival, share a story about each of the three main headliners, and a song from each!

It's been a long time since I went to a music festival like this. It was getting depressing to read about Coachella, burning man, Bonaroo, SXSW year after year and what I had missed.

The main headliners are Pearl Jam, Dave Matthews Band, and the Beastie Boys.

I have previously seen PJ and the Beastie Boys...but it must be a good ten years since I have seen either. In fact, it's quite possible that it's closer to 15. (/frown)

You can imagine how stoked I am to go, just based on the line up alone! Then I read more about the festival, and I just get giddy! I just read about Winehaven! "If music is not enough for you mookie, we will throw in your next favorite love: EATING!"

Music isn't the only thing that rocks in San Francisco. Local wine and food artisans make the Bay Area a delicious place to live. Outside Lands celebrates this tradition with its Winehaven tent in the Speedway Meadow. Winehaven features dozens of California's top winemakers and great local chefs serving up their freshest stuff. In the courtyard, cheese and charcuterie makers join Hog Island Oyster Company to ensure that no appetite get's left behind. With over 50 wines to taste and an unbelievable selection of local bites, Winehaven is the best picnic spot in Golden Gate Park.


Jealous? You can still buy tickets!

Ok. On to the music and the stories! 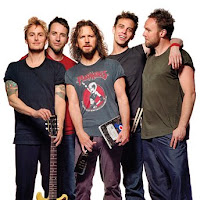 I remember waiting at midnight outside my local record store for this album to be sold! It was the first time I had ever stood in line in the middle of the night for a CD. Man, was it worth it. When I got that bad boy playing and the first song, "Go" came through the speakers, it was all worth the wait.

I had sorta given up on Pearl Jam

somewhere after No Code. I think I had become jaded with Pearl Jam's attempts to do things differently in a traditional sense. Less with the sounds on the album, although there was a significant change, but the way they boycotted ticketmaster and refused to make anymore music videos. In 2006, Rolling Stone described the band as having "spent much of the past decade deliberately tearing apart their own fame."

Sometime later, after seeing the fall out of the record industry and its demise, I began to understand the moves Pearl Jam was making. Now that I am older, I can understand the weight and turmoil the band was experiencing in a brighter light by weighing my own life and issues.

Now, coming full circle, I am just as giddy to see PJ in San Francisco as I was at 11:59PM outside that Warehouse Music store.

was one of the staples on the jukebox at my buddies bar. Let me paint a picture. My buddy was the new bartender working graveyard shifts at a slow dive bar. He would ask me and my roommate to come down and hang out, just so there would be a few people in the bar looking like they were having a good time.

My roommate and I would come in at 1AM after work, or sometimes just wander in from home in our pajama pants and t-shirts to play cards and drink beers for 3 or 4 hours just about every night he was working. During these heated card games where various amounts of wagers were placed, we would throw $10 or $20 dollars into the jukebox, and Dave Matthews was always in the list. I think my roommate, a dude who loved chick flicks and crazy women, was the big DMB fan. As you can imagine, I ended up singing along, and becoming a fan of the band. I really don't like any album except Under the Table and Dreaming though, but that album will always hold a place in my mind that is associated with shuffling cards and the stink of stale beers and cigarette smoke. 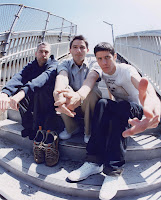 Click on the photo of the Beastie Boys and take a moment of silence for these badly aging hip hop geniuses.

I remember floating in the Lazy River of our local water park with my friend, trying to sing Paul Revere from beginning to end with out messing up!

My favorite Beastie song is High Plains Drifter. I love the cocking of the shotgun, and the vocal layering in the song. I love all the weird samples weaved in also.

I have seen the Beastie Boys before. It was another festival, and there were thousands of people and I was squished in the pit. Ass to elbows; you could not move if you wanted to. I saw people bloodied and beaten trying desperately to get out of the pit to get medical attention. It must have been like being lost at sea for those poor souls. Well...They soon figured out that the way out was on top. There were dozens of wounded exiting the pit on the hands and heads of the crowd. It was one of these wounded souls who hurt me. I saw him coming. I saw that giant steel toe shoe headed my way. No where to go though, so I braced for impact. By the end of the night my head looked like I had road burn. It was not pretty.

Buy some music from these artists, there must be a CD you are missing from their broad discography.

I am SO jealous. This sounds amazing. This is totally something I would go to.

I worked as a sales girl at a clothes store called Shelley's the summer after my freshman year in college. The DMB CD was in a 6 cd loop that I probably heard 500 times that summer. Still love that song, that CD...although it's still the soundtrack that plays in my head when I see people wearing ill fitting clothes.

I too am so jealous! I would love to be able to do something like this, but never really make the attempt to do it. Plus, it is hard to find someone that is up to the challenge, it is quite different than a normal concert!
Have fun, can't wait to hear all about it and see some photos!

Well. I'm very excited, and the more we get info about this event - which is only in its second year - the more excited I get.

We did Warped with no problems; that was a great trip. But yeah, hoping to go to this festival and that festival and then stuff getting in the way has been tough. We're very blessed though to have gone to all the shows we have!!

By the way, no DMB story for me. Just that I love when he pops up in a random movie out of nowhere.