Just go ahead and play the track first.

Moo--Dee. Moody. It's in the raspy voice and all the sounds from the supporting instruments that follow suit. You heard it on the first full-length album from the Silversun Pickups, Carnavas, and this time around... It's as if our hero has finished writing stories and songs and metaphors and manifestos about things he observes and now has summoned the courage to write them directly to the one he loves. 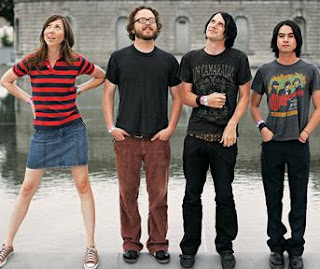 Silversun Pickups is the indie band that hails from Los Angeles, California. It's the one that reminds you a lil bit of The Smashing Pumpkins in their sound, and maybe of Straylight Run in their makeup. Lead by both Nikki Monninger and Brian Auburt (who play bass and guitar, respectively)they might get some comparisons to the now-defunct but just-as-sincere Straylight. Rounded out by Joe Lester on keys and Christopher Guanlo on drums, the band also sought support from local strings players and wound up with a 16-piece orchestra to back them on tracks on their second full-length album, Swoon. The angry music and strong, haunting strings are best showcased, maybe, on track 2, "The Royal We."

But our hero doesn't need a private blog or journal. Let's be perfectly clear. There's no secrets this year. Her heart has been blown open. His too.

Catch Silversun Pickups at Sasquatch this year, or at any of their other engagements. They are said to deliver an amazing and extended set.

Can't believe that the lure was enough