no matter what, you can't take that from me 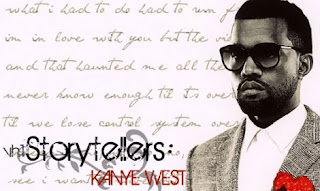 Was OJ Simpson amazing? Did he just live long enough to become the villain?

Kanye West Storytellers. I had heard the audio rips before it aired. Saturday night I finally got to catch the show on TV. 80's haircut, Autotune, and the orchestra dressed as extras in the film V is for Vendetta. If you haven't seen West's performance, here is how the set list went down:

The reinvisioning of the music, and amazing visual aspects made this one of the best storytellers I have seen thus far.

It’s amazing, I’m the reason
Everybody fired up this evening
I’m exhausted, barely breathing
Holding on to what I believe in
No matter what, you’ll never take that from me
My reign is as far as your eyes can see

I actually caught the show as the performance for Flashing Lights was beginning. Kanye's performance rubbed me the wrong way immediately. I struggled trying to find a transcript to share and use for this post. Sadly, I came up empty. It's a shame too, because West says some of the most hilarious things during this performance. In just about every performance and public appearance actually. I'll just have to sum up my emotional response, at first, as this:

You cocky, arrogant mother fucker. You are not ALL that. Come on. Who is this douche bag. You are no Biggie. You are no Tupac. You are sporting a mullet now, for god's sake.

Im a monster, Im a killer
I know Im wrong yeah
I’m a problem that’ll never ever be solved
And no matter what, you’ll never take that from me
My reign is as far as your eyes can see

But, just as he always does, he brings us back to the other side. The side where we eat our words and say: Ok. Maybe you are allowed to be cocky and arrogant, because you really are that good. I can't fucking compare you to those rap legends, because you are something entirely different, aren't you? He's the worst case in this scenario. He's a genius, and he flaunts it. Constantly.


Although, he does own 12 grammys, so it's not like he doesn't see this subtle reminder of his greatness everyday, chillin' on the mantle.

My favorite part was when the rapper/singer took some time to talk during the song Amazing, and he spouts of some crazy shit, that suddenly and unexpectedly, brings West, the song, the new album, his whole career and drama, into sharp focus.

He seems to derail when he says this:

"Michael Jackson, amazing. Michael Phelps, amazing", with each name drawing louder cheers from the audience. However, when the Kanye says "O.J. Simpson, amazing. Is he not, what he did, was he not amazing though," the crowd just gets confused. I just laughed. West, this spoiled kid from Chicago, just knows how to use controversy to get talked about. He wields it like a Jedi wields a lightsaber. Did i mention he is a genius. Did I mention how, sometimes, the only distance between genius and insanity is just a blurry white chalk line on the ground?

Then Kanye goes on to say:
"You either die a superhero, or live to become the villan," which is a butchered line from the movie Dark Knight that he uses to nail the point home.

It is tough being in the spotlight. It's hard to be normal when you get all the awards in the door. You soak it all up. You believe your own hype. Then after that, it becomes this new bar that has been set. Then you beat that too. You go a little crazy in your own head. Seclude yourself, read about your hijinxs in blogs, watch them repeated on TV and TMZ, time and time again. Then with that magnification, you have to endure real life. Your mother passing, you want to fall in love and be loved. Instead you are lonely. Real pain. But everything is already turned up to 11. Imagine that. I lost my mother. I know what it does to you. I know someone close to me who lost their mother over 30 years ago, never dealt with it properly, and has really twisted his life and the lives of his family. That's what can happen sometimes. It's real.

With this new perspective, I am filled with a new respect for Kanye.

I’m a monster, I’m a maven
I know this world is changing
Never gave in, never gave up
I’m the only thing I’m afraid of
No matter what, you’ll never take that from me
My reign is as far as your eyes can see

The album is dope, even if it over uses the 808 and the autotune, pitch correction tools. The performance is dope, even if Kanye spouts random shit to get attetention. Boil it down? It's essence has more orginality and flavor then everyone else.

Help the recession and spend some money:

Some of the best rappers come out chicago
http://creativelyboundless.wordpress.com/2009/04/05/chi-town-aj-allen/