I guess it's true you never knew the passive power of the truth.

The Manchester Orchestra has recorded an epic album. An "I guess that's the last in-store acoustic performance" album. A "28-month-long world tour" album, and a "too bad your favorite band is no longer a secret" tour. They are quite possibly the most talented musicians the music industry has ever seen. That's a big statement, and I don't make it carelessly.

Even Rainn Wilson knows they're going to be as famous as any arena band you can think of. He twittered so (wull... kind of):

Mean Everything to Nothing is their second full-length album. We covered their recent EP here. This entire piece of work brings the layering of vocals, guitars, keyboarding and skins to epic heights. Andy Hull's promise that this album would be aggressive has been delivered. That was my impression of some of these tracks as they were previewed right around this time last year on tour. As I listen, I am perplexed by what additional instruments I am hearing. This is an amazing congruence of sound. Actually, that is just the genius that is Chris Freeman on keyboards. 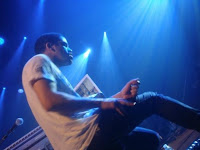 "And Chris doesn't really play keys, it's more like lead guitar. Most of the moments that sound like a crazy guitar are actually keyboard. He really made the record his own by writing ambient swells, piercing tones, and adding chunky, beefy distortion." -- themanchesterorchestra.com

"I am not ok, and there's a beauty in that-- a calming, a forgiveness." The album takes us on a journey of self-awareness and acceptance, but even without listening to the earnest vocals and their meanings, you still have one of the strongest rock albums that exists.
Track 5, "In My Teeth", repeats the snarky phrase featured this blog post's title (so timely, too...) Hull shares very plainly the intellectual struggle that the faithful possess. Did we ever really need it anyway? Will we ever find out?

You will notice that in the first half, the songs bleed together seamlessly as leader Andy Hull demonstrates his struggles with angst and anger. I bet you did what you did when you did just to tell every friend that you have that the Lord did it.

What I feel and hear in Track 6, "100 Dollars" is the acceptance that I am going to mess up and do dumb things, I am going to totally lose my shit in front of the ones I love, and... I am going to recover from that and forgive myself, and move on to find my place and purpose in life. From this point in the album, this mystery - our purpose - begins to slowly unfold and reveal itself, and then switch gears and remind us that it's still a mystery that just might remain intangible. Listen to Track 7, "I Can Feel A Hot One" - which you may have heard before, but now in the context of this life journey called Mean Everything To Nothing, understand it as the awakening and the turning point of becoming a self-aware adult.


[Download The Manchester Orchestra - I Can Feel A Hot One]

Back to that 11-part concept video, it's true. A video to go along with each of the tracks on the album. Watch part one here (it is, obviously, the video for Track 1 - "The Only One."

Manchester Orchestra - The Only One


If you want more videos, someone wrote a great blog post about another video in the series, Shake It Out.

And He whispered 'fear is logical'
In keeping with the idea that this is an album to go down with all the greats in recent decades, at the end of the album there is a hidden track. A stripped down, quiet track that gives us an end to the journey, still at peace with the fact that we may not know exactly where we went, or why.

If I am willing to travel to South Carolina, San Francisco, Phoenix, and Las Vegas to see The Manchester Orchestra, you know damn well I will be first in line to purchase this album when it comes out on April 21, despite the fact that I already have an advance copy. Are you going to be with me?

i agree. the cd is amazing. buying that.