Brim full of Asher on the 45 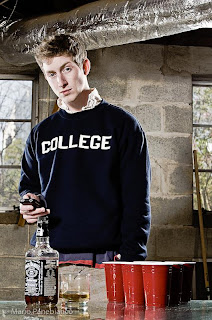 Maybe you were too stoned to realize that Asher Roth released his album “Asleep in the Bread Aisle” on that haze filled day.

In case you have missed all the hype around this kid, let me fill you in real quick. White, skinny, suburban kid who is fresh outta college.

...and he can rhyme and rap with an easy and intelligent flow.

Apparently his label was too dazed and confused to be ready for his release date, and under delivered CDs to the music outlets. With all the extra promotion that was on MTV leading up to the release, you would think the label woulda been on top of it. Maybe the label was too busy removing the leaks on priatebay to properly plan?

inALLcaps.com to the rescue! You could go down to your closest music store and...WHAT!? They closed their doors? Oh. Fuck it. Go to iTunes or Amazon and download the album while you still can!

It’s a hot little album, reminiscent of Eminem’s first album, The Slim Shady LP. Asher hates it when I do that though. Comparing him to Eminem. (See the song As I Em below.) I mean, they look and sound the same, so the association is easy to make. Asher is right though, even though Eminem may have opened the doors to someone like him, Marshall he is not. Eminem even gives Asher Roth some props! 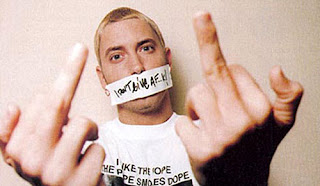 "Asher Roth, I haven't had a chance to, like, really get into everything, like, really get into what he's about, because I've only heard a couple songs. There was talk about people saying he sounded like me, and he was doing this and that and, you know, trying to take what I do and do it. You know, shit like that. I've heard things. But the stuff that I've heard from him honestly, which certainly isn't enough for me to make my own opinion and say, 'Yeah, he does sound like me' or 'No, he doesn't.' But the couple of songs I've head, I don't really think he does. You know what I mean? He's doing his own thing. I can respect it, too, because at the end of the day, I think he's dope."

Roth is more party/college/tech savvy/funny than Em is. The beats, collected from many of the top producers, help to make this release a trunk rattling affair.
I get the feeling that I might be out of the loop on Asher. Maybe he doesn’t get the respect he deserves, and is scoffed at by any self-respecting fan of hip-hop and rap because he is white, preppy and appears to have sold out? I have watched his freestyles though, and he has the skills in and out of the studio.

So, forget what you have heard, and trust me. It’s a good album that sounds refreshing in the recently stale categories of rap and hip hop.

If you want more proof than the track we share above, then check out this mix tape (torrent) which is freely available across the interwebs.

about 2 months ago my fraternity threw a party for asher roth to come/perform at. we hyped it up all week and it was huge. when he got here, he took a couple of blunts to the head, claimed he was too high to perform, then threw up. then, when we finally got him on stage, one of our fraternity brothers killed him in a freestyle battle.

no shit? LOL...that's awesome! just out of curiosity....was it a paid gig?