I'm only going to heaven if it tastes like caramel

I often have trouble with electro music, and I almost always find it difficult to get through an album that suffers from Multiple Personality Disorder. But Made in the Dark by Hot Chip must match the exact coordinates of my brainwaves, because I am all over it. When Mark Pytlik from Pitchfork reviewed it, he said:

"But of all of their many virtues, focus isn't one... A string of self-conscious interruptions, perfect pop moments, show-offy sonics, and inscrutable non-sequiturs, the lovable but flawed Made in the Dark has moments that come off as almost gluttonous-- and that's even by Hot Chip's standards."

He might as well have been talking about me! Am I right or am I right? 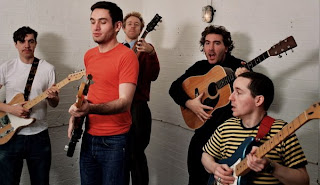 This album is a year old already, but how I suddenly became the review-every-new-album chick, I don't know. I'm sharing this with you just because.
If you haven't checked out Hot Chip yet, please let me introduce you.
This is a five piece band from London, all of whom possess DJ backgrounds. They found themselves in good company at this year's Grammy awards, with "Ready for the Floor" nominated alongside Daft Punk's eighty-fifth rendition of "Harder Better Faster Stronger" for Best Dance Recording.

I am just in love with the flow of this album, where the synth is not overused but I still get a zippy (yes I said zippy) vibe from the faster tracks, and it only took a second listen to fall right in place with the ballads that are interspersed throughout. Perhaps it's because each track consistently possesses cute, witty, sappy, silly, or just plain inane lyrics.

This is the track whose refrain nearly made the title for this blog post. I think it's a good representation of the album: a nice mix of the electro pop and the slow burn tracks on Made in the Dark.

What is it, I don't remember
Made my being so much better
If I can have just one pure thought

The boys are reportedly back at work in the studio, without any tour commitments on the horizon. The idea was originally to work fervently to release the album in Fall 2009, but they have been drawn in to play a track here or there in support of some good causes already this year, such as War Child and Crisis.

They're a group of top blokes, I reckon. I want to share with you just one more song, and then you can get to the checkout section, because you know you want to.