If I was Eddie Vedder, would you like me any better? 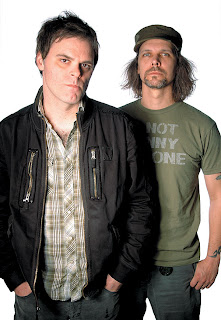 I have always thought Local H was great, but perhaps a little inconsistent. That's not the case with their latest effort.

12 Angry Months is an album of twelve tracks. Each track represents one month in the year after a relationship has ended.

Local H decided to make a concept album (not the first time). They have taken back the "Break-up" album from the emo kids. Local H wasn't going to make the "feel sorry for myself" kinda break-up album. Local H has made the "ANGRY, bitter" break-up album. And then there was light.

All I can think of now is whether break-up is hyphenated or not.

Local H is an unusual band in that it only has two members. Scott Lucas is the singer, guitarist, and bassist for the band. The other member is Brian St. Clair who plays the drums.

I've been a fan of Local H since Bound For the Floor in 1996. For some reason though, I lost interest once I heard the album Here Comes the Zoo. I have recently re-listened (is that fucking hyphenated?) and come to realize it's better than I remember, but still leaves much to be desired.

I have lost countless CDs and books and furniture after a breakup. Mostly my fault. In an effort to make an uncomfortable situation easier for that person leaving my life, I just stay out of the "This is mine and that is yours" conversations. Although for years afterwards I curse their names when I am looking for my Watchmen graphic novel or that electric drill or the food processor...you get the point.

But one of the hardest things to split up, as Lucas so eloquently wonders in this lyric from The One With "Kid":

You shouldn't fucking be able to stay friendly with my friends after we break up. Go find your own new friends. Now when I visit my friend I get to see your ass again? Pour the salt on and tell me how you guys are best friends now. Are you fucking him too? That's what I just heard.

I know, it's irrational. Well, you are a better person than I. It's a bitch move. While you're at it, I want all my shit back. All of it. Lucas continues:

(Editor's note: I never even heard of Kyuss before hearing this song, and I just discovered they rock. Here's a freebie if you promise to buy the album at the end of the post.)

Though, it's not all angry and bitter. There is one song, The Summer of Boats, that definitely is a sad and ballad-like. We gents do have hearts. We are capable of reflecting, and reminiscing. 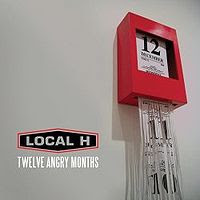 Then there is track six, otherwise known as June, AKA Taxi-Cabs. This month might be rife with a bit of abusive behavior. Partying hard, trying to forget. Tearing through drugs and women, just to blur the memories.

After that it's a few months of the rebound, and then the realization that it's all bullshit. A grand waste of time, because in the grand scheme it's fucking meaningless.

The message: It will all happen again. Endings are beginnings after all.