I thought Trent Reznor was just being mean and overly critical. He sent the following tweet after listening to Scream:

The album starts out with some sort of horrific trumpet fanfare and I am already cringing. wtfwtfwtfwtf is all I can think. Mookie is overjoyed because he has hated Chris Cornell ever since he took up with Rage Against the Machine members to form Audioslave. I, on the other hand, have remained faithfully devoted since Badmotorfinger in 1991. I was down with the whole Seattle thing and all the roles Cornell played in it. Screaming Trees. Temple of the Dog. Alice in Chains. SINGLES!

If I should be short on words, and long on things to say... 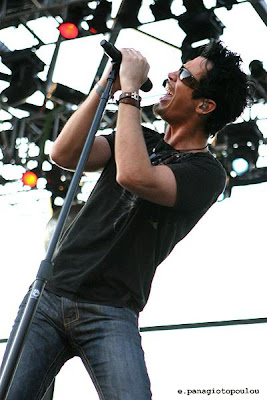 The thing I have most loved about Cornell, other than his general hotness (swoon), is his impeccable gift of lyricism, as showcased above in one of his first solo efforts, from 1992's movie soundtrack to "Singles". So as I attempted to give track 1, "Part of Me", a fair listen through my cringes and distorted facial expressions, I had hope that this song would start to make sense.

Alas, it is a hip hop song, and it's not supposed to make any damn sense at all. So, it doesn't.

I love the man. I support him in wanting to do something fun. Wouldn't you make a record with Timbaland if you were given the chance? I just can't fathom how he can call a track finished, and sign his name to it, when the lyrics read like the ecstasy-induced scattered thoughts of a clubgoer.

He considers the album "an interesting sociological experiment," since people seem to be more concerned about who is making the music rather than the music itself.

"That part's kinda fun," Cornell, 44, told Reuters in a recent interview. "If someone is up in arms about the idea of an artist that they really care about doing something that they just can't believe, it begs that question, 'Well, what is it that you would want? Would you then want predictable, comfortable salad that gets reproduced year after year?'"

"The Answer is: listen to Bad Religion and yes," says Mookie.

The title track is a disaster. Since when does Chris Cornell have to be obvious with his lyrics? It makes me want to cry.

It's a travesty. You may find it funny, Chris, but I adore you, and it's not funny. There is one somewhat redeeming track on the album. I was able to enjoy "Enemy." And look, the music on the album is really good, and I should add the disclaimer that I really don't like present-day hip hop. This is probably a really enjoyable album for Timbaland faithfuls and others who don't know what flannel is.

There are 15 tracks on this album. 15 tracks! I don't think I can listen a second time. I'm sorry. I'm proud of you, Chris...I'm glad you are enjoying this. I'm just not there with you.

For $10, though, you might as well try the 15 track "Scream". Listen to it and tell me what you think. And if you're feeling nostalgic, or interested in what I loved back in the 90's, you can check out some of the other grunge projects CC has participated in. And for God's sake, get Singles.

This is exactly how I felt when I listened to the previews of the tracks. Amazon had it on sale for 1.99 and I didn't even want to buy it. That is so sad.