And these hazards of love nevermore will trouble us

For some reason, I don't fully understand the incessant comparisons between Neutral Milk Hotel and The Decemberists. "They're like Neutral Milk Hotel," I could understand. But "they're no Neutral Milk hotel," I have a hard time with, since the latter band formed long after NMH stopped recording albums.

A criticism for sounding like the band that influenced you? This makes no sense. Is it a regional thing? That a band from the pacific northwest shouldn't dare sound like a band from the south?

Ah... Is that it? Harrison Hudson! Another twitter calling-out of a band! Wait, add it up... Harrison is from the south... Hmmm... Do I have a theory in the works?

What about Death Cab for Cutie? These three groups are often pitted against each other as if in a favorite child competition. What's with this? It makes me conjure Max Bemis...

Despite your pseudo-bohemian appearance and vaguely leftist doctrine of beliefs, you know nothing ABOUT art or sex that you couldn't read in any trendy new york underground fashion magazine...Proto-typical non-conformist. You are a vacuous soldier of the thrift store gestapo. You adhere to a set of standards and tastes that appear to be determined by an unseen panel of hipster judges-BULLSHIT-giving your thumbs up and thumbs down to incoming and outgoing trends and styles of music and art. Go analog baby, you're so post-modern. You're diving face forward into an antiquated past, it's disgusting! It's offensive! Don't stick your nose up at me! 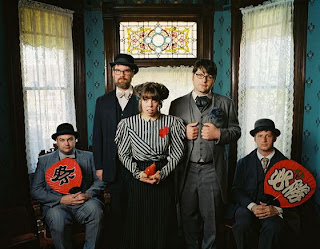 Oh beanie-wearing artsies... Can't we all just get along? Let's get to the album review and leave the competition behind. This Tuesday, The Decemberists' fifth studio album is to be released. (And I will beat the horse for just a moment to point out that The Decemberists are still making music.) This album, The Hazards of Love, may be the album to catapult the band past the other indie/experimentals into first position in the hearts of the genre's followers, although the reviewers at Entertainment Weekly seem to disagree - they assigned a D+. Then again, that particular reviewer doesn't seem to appreciate rock operas in the first place.

A rock opera? Yes. That's what The Hazards of Love is. And for the first time in a long time, I can conceptualize the story from beginning to end on such an effort. Track 10, "The Rake's Song", is probably one of the best illustrations of such. Look, I appreciate metaphor in song. But in a rock opera, you've got to be literal. And I love that about this song. And you can count on The Decemberists to utilize historical, outdated, or just plain British colloquialisms throughout their lyrics. Do you know what a rake is?


[The Decemberists - The Rakes Song ]

Another item to appreciate about The Decemberists is that this opera is being performed in its entirety at their live performances, such as at South by Southwest last week. It's meant to be heard all at one sitting; should it not, then, be performed all at once? This album gets The Little One's approval. It's good. Sit back on some cushy tasseled pillows with a hookah and enjoy it. I especially appreciate the album art. It's just as I would have imagined for this story.

Just one more item, to further confuse my pac-nw versus deep indie south theory, The Decemberists are slated to play Bonnaroo in June, but not Sasquatch! in May. They'll be playing two phases of a tour over the summer, so browse their myspace or their website to follow them.

Tell me now, tell me this,
A forest's son, a river's daughter,
A willow on the willow wisp,
our ghosts will wander all of the water.

So let's be married here today
these rushing waves to bear our witness,
And we will lie like river stones
rolling only where it takes us.

We all do, buddy.