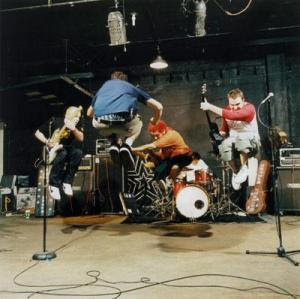 New Found Glory kicks off an enormous tour today with a show in Brisbane, Australia. In the coming months they will blow through Australia, Japan, coast to coast in America, Canada, keep the eastward momentum going throughout Europe, and wrap it up in Germany by June. Amazing. And I know they are going to kick ass and have the time of their lives on this insane trek. I may have to jump over to the L.A. area to catch a show in March.

These boys are batshit bonkers. I love them to death. They've been churning out pure skinny kid punk rock (that's a genre I may have just made up. I'm not saying the NFG fellas are all skinny kids) for more than ten years. Two of my favorite albums from NFG are covers from movie soundtracks. In 2000 they released From The Screen To Your Stereo with adorable, fun, sped-up tracks like "The Neverending Story" and "Goonies 'R' Good Enough", and this gem which catches my breath every time. There exists a video of them playing this acoustic which I've never been able to properly copy. It's just beautiful though:

This was such a great idea that they reprised it in 2007 with From the Screen to Your Stereo Part II with all kinds of greats, but again, it just melts my heart to hear this Cash cover. Listen all the way to the end for your special treat:

NFG loves to use the interwebs and video cams to have fun. Currently on their myspace site you can get involved in their latest: NFG: A Game By New Found Glory where you can use the band members as your fighters, to promote the album, Not Without a Fight. Over the years they've done podcasts, crazy music videos, and other silly shit that reminds us all not to take ourselves too seriously. Check out the promo video and notice the big man himself, Brett G of Epitaph (slash Bad Religion), narrating. By the way, if my lame attempt to manipulate html (I'm not a code monkey, I only sleep with one)is successful, you can pre-order the new album to the right:


Speaking of not taking yourself too seriously, I think this was maybe what happened when they recorded the album Coming Home. I still have mad love for them. I still sang along to the sappy songs on that album. But it honestly sounded like it was recorded specifically in hopes of getting radio play (oh no! Am I dissing radio AGAIN?!) Don't let that turn you off. It was clean and well-performed, but I don't think it really represented their sound and their shtick well.

Catch their show as they come blazing across the globe. And pick up any albums you may have missed along the way below:

I LOVE their new record. NFG never seems to disappoint and they certainly didn't with this record. They've taken so much of my money already haha I bought everything on this page - http://kingsroadmerch.com/new-found-glory/