I still dream of runnin' careless through the snow

The band is Blitzen Trapper. They've been around for awhile, so it's alright with me if you pretend you've known of them all along. Their fourth album is called Furr, and it was released this past September. Rolling Stone said it was one of the best albums of 2008.

SPIN described the band's music as suitable for "cubicle-penned office drones in desperate need of a vacation." I may not be cubicle-penned, but desperate doesn't even begin to describe my need for a vacation. I digress. Speaking of SPIN, I've been reading Chuck Klosterman's Killing Yourself To Live and as I finished chapter 6, something he said about the Allman Brothers gave me the resolution to write this blog. He'd been bashing them on nearly every page thus far, but he made the point that it's difficult to carry on a conversation during "Ramblin' Man."
This is true, isn't it! And what does that say about a piece of music? Perhaps it's not a testimony to a work of genius, but if you're forced to stop and sing along... Wait, what does that mean about the Britney Spears music that I hear at the mall? Do I have to digress again?I bet my boyfriend wishes I was unable to carry on a conversation during any song... I have been known to talk a lot. 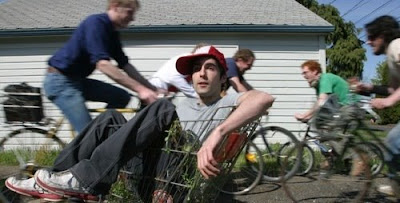 I am not the only one making an Allman Brothers connection. Check out what their hometown paper, The Oregonian, had to say about the music:

...showcases an impressive array of alt-country and psych-rock songs that sound a little as though Wilco ate the mushrooms growing in the Allman Brothers cow pasture.

Look, it's good stuff. It makes me feel like I'm finally old enough to really appreciate Bob Dylan or Tom Petty. In the form of Blitzen Trapper. And that's cool with me. Check out the title track, Furr.

I'm shaky at the knees. Would you take me by the arm and settle down upon a farm?