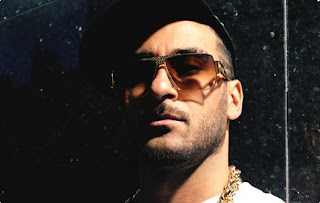 So last week, I started you all off with a few old school Armand Van Helden tracks and remixes. It got a pretty good response, actually. Well, except from the Strictly Rhythm folks, and we can understand why, so we took down the mp3 of "Break Night". Hopefully if you guys trust my opinion, you'll buy the track, anyhow!

So this week, we're bouncing ahead a little further. After his seminal album 2 Future 4 U, he has just sort of gone downhill, unfortunately. The edge isn't there, any more. That's a real shame, because for a good half-dozen years, this guy made nothing but quality. Here I'm sharing a few more of his tracks.

To start off with, we're going to bring up Daft Punk yet again. Daft Punk was part of a crew that called themselves "Da Mongoloids". Well, according to discogs, it was just Bangalter of Daft Punk that took part in the crew. The crew would extend out to guys like Junior Sanchez, Basement Jaxx, and DJ Sneak, amongst others. Well, Armand made a remix of "Da Funk" that really is just a nutso take on the original, and here it is.

Next up is possibly his best known remix, and the one that got him the assloads of work he got after this one. He remixed Tori Amos' "Professional Widow" and then, just about every DJ worldwide seemed to be playing it. It was one of the anthems in dance music in 1996, and for good reason.

The next three I have listed here are much lesser known remixes by Van Helden. He went on a remix tear for a few years, and was remixing just about anything thrown his way. Hell, I even found a copy of the 12" for Rednex "Cotton Eye Joe" with three remixes he did. And yes, it's godawful. I won't even force you all to listen to that one. Well, here I have listed his remixes of Apollo Four Forty's "Ain't Talkin' 'Bout Dub", Skunk Anansie's "Secretly", and The Trancesetters' "The Search". The last one, I've seen iTunes list an Armand remix that, unless he made a 2nd version? That isn't it. So don't waste the time on it.

Now, I have plenty more Armand cuts, and for now, I am going to leave those on the backburner. I think I'll revisit this topic again in the next month or two, because I have a lot of good stuff to share that wasn't made by Armand. Stay tuned if you're a househead, because I have a few more gems to share with you all!

Now, go buy some of this! We do, and so should you!