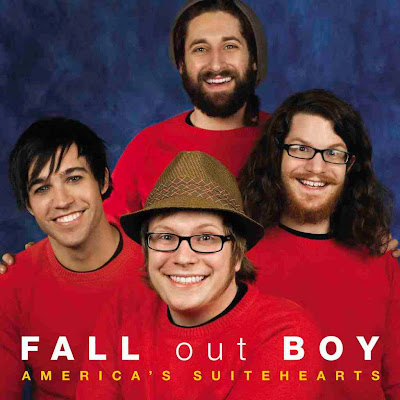 They keep getting better.

...And that was back when Infinity on High was released. Sure, we could have just bought it on iTunes. But there are still some bands worth a midnight trip to the record store. Music snobs will be aghast that Fall Out Boy is slotted into that category. But give Folie a Deux a listen and it's easy to see just how talented this fourpiece from Chicago is. And how far they've come.

When I hear "She's My Winona", (and by the way, before we give emo a bad name, let's take a moment here to give reverence to Johnny Depp) I feel like I am listening to one of my old favorites off Take This To Your Grave or Under The Cork Tree. The "quit burning bridges and drive off of 'em" dark lyrics that get delivered so beautifully by Patrick Stump it allows for both the dry humor and the pain to emanate.

But what I hear all over Folie a Deux, besides all the cameo appearances,

Elvis Costello from ELVIS COSTELLO!
Brendon Urie from Panic at the Disco
Travis McCoy from Gym Class Heroes,
Alex DeLeon from The Cab,
and William Beckett from The Academy Is

is what I fell in love with years ago but enhanced. What I thought couldn't get better before, BETTER. In ALL CAPS. And it still takes my breath away after all these years. It surprises me how much better it gets. Sure, the early days were unsure and awkward. It's mildly embarrassing to think back to those days. But as it got good, and built more and more on what was good, and went in bold directions... wait, am I still talking about FOB?

If you are looking for something BETTER, don't look for a Kanye West remix. You want a MASHUP. Check out FOB vs White Stripes. And don't make Baby Jesus cry. Go buy some Fall Out Boy.

Dance With A Seven Nation Army by geediablo