The Man, The Myth, The Legend

Well, call him what you want. I call him my friend. He's a good solid person that I trust and respect. He's also been known to drop a hot house set from time to time, but it seems those days are behind him.

He is Walt Zink. He writes for this here blog. In fact one of his latest posts got us to the number one spot on the most popular songs of hypem! We were very stoked to see that happen, as well as the gigantic jump in traffic and subscribers!

In honor of this achievement of Mr. Zink's, I wanted to share a track with you that he introduced to me some 10 years ago? The artist was Jackson and His Computer Band and the song was "Make It Happen". This song to me was some sort of awakening for me. I scoured the web and record stores for more french house. I wish I had an MP3 of this song to share with you. Sadly I could not come up with one, and Walt's vinyl has a bad scratch in it. (Status update: Walt bought us each a copy on vinyl...hopefully one of us will get it in a post ASAP. Stay tuned!)

Instead I will offer a few other songs by Jackson Fourgeaud (he is the one man band that makes up JAHCB) for you to nibble on until then!

Off the album Smash:

[Jackson and His Computer Band - Utopia]

One last thing. When I went to hypem.com to catch our blog in the number one spot, I listened to some of the other songs in the list and I found a band that I am now a fan of. Mae Shi are an indie band from Los Angeles. I took this from their myspace page: 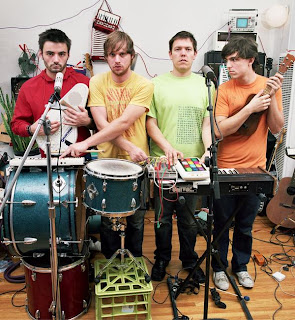 We are The Mae Shi. We were born in Los Angeles in late 2002. If you are just hearing of us now, you missed out on four records and 250 shows of busted electronics, spazzier-than-fuck drums, crazy-ass boogie guitar, distorted caveman bass and throat-destroying vocals. You missed us playing in 100 different basements and garages to 100s of different kids. You missed our 59-minute-long debut EP and our 5RC debut full-length, Terrorbird, which was a hyper ADD-afflicted hip-hop concept album about monsters and the Old Testament.

This is our story, and we invite you to come along. It’s about self-improvement and trying to live life at the top of your lungs, living life rightly, respecting others, making something you’re proud of, and trying to sort out all the static and figuring out what matters. It’s about trying to forge that third way, that way everyone said it couldn’t be done. We do this in basements and backyards and in fancy clubs we don’t even feel comfortable in. We do this in living rooms and bathrooms and bedrooms and wherever the sound sounds best. We do this with ten dollar keyboards and Olvera Street guitars and with light-reactive synths we built ourselves. We do this with broken cymbals and busted speakers. We do this the first thing when we wake up. We do this after a hard day at work, when it’s the only solace and life seems to be a constant source of frustration. We do this on weekends. We do this all the time.

Check out their myspace page if you have a moment to read the whole story.

And I leave you with my favorite song from theirs off the album Hillyh as well as an amazing video for another amazing song from that album.