You know me better than I know myself... 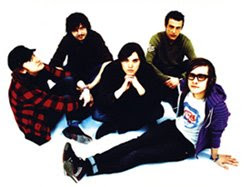 Listening to People in Planes is like being comfortable in your favorite bar. Finding out that they're a band from Wales brings a universal understanding to this feeling, and an awe that people from a backwards country normally known for good punk pop can also produce this thick, mid-American variety of rock.

If you wanted to pick apart the lyrics, you might have fun challenging me over my "I Hate Kings of Leon" post. All I can say to that is, at least People in Planes stays on the beat.

If this song isn't skillfully crafted to appeal to the masses, I don't know what is. Enjoy Know By Now:

People in Planes have changed names twice already this decade. Also known as Robots in the Sky and Tetra Splendour, they've shuffled labels a few too many times in a short period but since their appearance at 2005's South by Southwest festival, it seems that they are on a roll. They've toured with Blue October and had a video directed by Joaquin Phoenix! That's progress in my eyes...

Today is November 21: the day that hordes of teenagers and desperate housewives alike have been breathlessly awaiting is finally here, so to celebrate Twilight's premiere, I will share with you another track off 2008's Beyond the Horizon album: Vampire. This is a messy departure from the rest of the album but it still comes off as a calculated and passionate disaster. Kind of like the books.

It's time to show some love to People in Planes.

Or join the teenage vampire craze, why not?