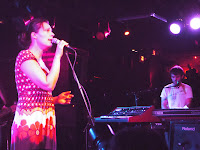 So for this concert series piece, I will be discussing Stereolab. Don't know them? Well, you should! These guys have been around for close to two decades, and they've even had their worst emotions tested when one of Stereolab's members, Mary Hansen, was tragically killed a few years ago. They have a new album out now, and are touring in support of it, so being a decade-plus-long fan? I had to go. I'll be showcasing a few songs of theirs, but also I will be talking a little about their opening band, Le Loup. 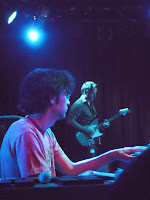 Stereolab is the sort of group your parents would probably dig. Think indie-rock meets bachelor-pad easy listening music. It sounds odd, but they've established themselves as the kings in such a small niche. Many times, a band suffers from such marginalization, but these guys have mastered it. The unfortunate death of Hansen took a bit away from the band, as they relied on two singers for many of their songs, but they've worked to solve that, by adding another singer (a male falsetto) to the repertoire. It works surprisingly well, and hopefully it continues. 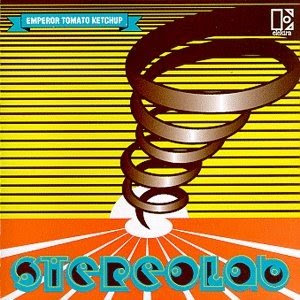 The album that first got me interested was one that many people also say first turned them on to the 'Lab. Emperor Tomato Ketchup is a funny title, but it's one hell of an album. I'd go so far to say one of the top ten of the '90's. It's certainly debatable but that's the beauty of the subjectivity of music - there really is no such thing as a right answer. They worked more towards the moog synthesizer sound the later into the '90's they went, and it produced some of the best - and underrated - music of the later half of the decade. Here, I'll be focusing on three tracks in particular.

First up is "French Disko". This tune was originally just a single, but was later included on Stereolab's second compilation of Switched On, titled Refried Ectoplasm. This sounded just as good Monday night as it did when I first heard it over a decade ago.


Follow the links below for treats off of ETK that I mentioned earlier. "Les-Yper Sound" is just one helluva cool rollin' track. Mellow, yet it rocks. "Les Yper-Yper Sound" is essentially a live remix on BBC Radio that was included on the box set Oscillons From The Anti-Sun. Sick sick track.

I've just got to share another vital Stereloab track. "Diagonals" from Dots and Loops is chill... Loungey... Whatever you want to call it, it's a great cut for playing at a house party that's made up of people older than 25. This track essentially defines the sound they took on starting with this album.

As I mentioned, the band Le Loup opened for Stereolab. They could easily be signed onto the DFA label with what I saw Monday, and they're a good reason people should check out the opening bands. They had a very unique sound to them, which contrasted with Stereolab's, but complemented it at the same time. Good choice by the 'Lab having these guys open up for them!

Here is a sample of what you will hear from Le Loup. And below that? Links to buy all of these fine products! Because buying this stuff helps keep it alive!

Le Loup - We Are Gods! We Are Wolves!

Buggery. I had to sell my ticket for the Stereolab concert that, as I type this, is happening directly across the street. Booooo. Excellent blog about an excellent band, thanks! And thanks for kicking me while I was down.. unintentionally of course.