Tired of Being Sexy

They're not new to the scene... And they're not new to music bloggers... But chances are, they're new to you. Don't punish yourself for not running to look up the artist whose song played in that cool iPod Touch commercial. Here's your chance to discover CSS.


This video was actually made for fun by a British kid, not unlike any other youtube video, but found by Apple's ad agency and launched in their campaign, with barely any tweaking done at all. Amazing, huh!

CSS is a crazy, fun-loving, post-riot-grrrrl band (plus one dude) from Brazil. The name is short for Cansei de Ser Sexy, which is Portuguese for Tired of Being Sexy. I love the gung-ho manner in which this group embraces, worships, and sometimes caricaturizes American pop culture in their music, lyrics, stage presence, and not least of all in the selection of the band name (a Beyonce quote.) 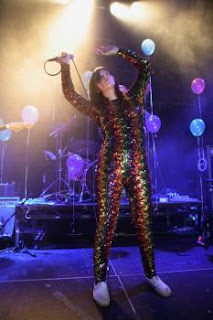 The music is very electro, very synth, very 80's. Yet, watch them live and you get to enjoy the hard-rocking guitar-strumming L7 style female hair band fun that everyone seems to have forgotten about. They are crazy. They are nuts. So are their fans. And they are having the time of their lives. In fact, while forming the band, they really just asked themselves who they wanted to hang out with and who they had the most fun drinking with. Playing music you love and getting away with singing some of the most "naughty" lyrics in a foreign tongue, living up to that "just have fun playing crappy [good] music" ideal that Sonic Youth embodied... What could be better than that?

This track, by the way, is not an example of those impish-sounding naughty lyrics, but rather has been pointed out by lead singer Lovefoxxx as one of her favorite songs to perform live. Enjoy Air Painter:


CSS is not going to put out a concept album any time soon. In fact, they never intended to be touring the nation and giving interviews. They set out to play, rock, sing, drink, and have fun. And now we all get to experience it. So lighten the heart and put on a stupid outfit and buy one of the CSS albums. And catch them if they hit a festival near you!