Maybe you're the one who'll complete me

Bloc Party has a new album out called Intimacy. I think it's fantastic, but I have liked everything this band has put out. It speaks to many parts of me. I love rock. I am a DJ. I like diversity. I like indie bands, too. Bloc Party is probably one of the most popular bands in the indie genre. 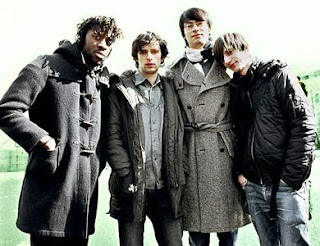 Despite their popularity, this new album seems to be getting negative feedback: sounding overproduced to sounding messy and utilizing too many effects.

"Were you hoping for a miracle?"

"Bloc Party is an autonomous unit of un-extraordinary kids reared on pop culture between the years of 1976 and the present day ..."

Wipe those dirty hands on me... Check out Halo:

Is Intimacy cutting edge? Not for Bloc Party. But it is different from their previous albums, Silent Alarm and Weekend in the City, in many ways. Half of this album is dreamy and subtle, with the other half showcasing grinding guitars laced with electronica. No real difference there, until you break down some more subtle elements: It is different from past work in the perspective of songwriting. Okereke had never really written songs about his life and relationships before this album, but as I have said before...heartache makes for amazing songs.

Intimacy, aptly named, is about Okereke's year long relationship with...well, I couldn't find out. I couldn't find out if it was a male or a female. Much of his life is vague and mysterious. He has compared himself to famous bisexuals (David Bowie and Morrissey) and has discussed the homoerotic story behind the song "I Still Remember" as semi-autobiographical. It doesn't matter. A broken heart is very often the spark that ignites a great piece of work.

And to satisfy the DJ in me, I present you with a remixed version of Mercury:

Like a relationship, this piece of work is both confident and unsure.
Graceful and clumsy.

With that, I ask you to gracefully drive to your local music store on October 28th, and confidently pick up this CD.

I've seen this band live, and was very impressed, so if you get the opportunity to see them in your city, make it happen.

Email ThisBlogThis!Share to TwitterShare to FacebookShare to Pinterest
Labels: hand on your neck, helicopters, pit of pillows, talons