...and I wonder what happened the day that I fell from the sky.

I am lying on a tiny bed in a small hotel room that I am sharing with my brother in London. I'm reading Anthony Bourdain's book, Kitchen Confidential, when my brother rips out his iPod headphones to exclaim, "The new Faint album is amazing!"

At this point my head is all messed up from jet lag and I just want some peace and quiet, but for all my brother doesn't know... Music is one thing he does know.

It's in his blood. Well, okay, that is stretching it. There are no musicians in our family. But from the moment he could crawl, I was pushing music all over him; giving him tapes and vinyl to hear. Discussing music when he was able to speak intelligently (some would argue he still doesn't speak intelligently...) When I got the job in the music store, and was taking home every free demo from the record labels I could get my hands on, I did my part and shared it all with my lil' bro.

We share many similar tastes in music, obviously. But I will point out that he was on the cutting edge of the emo/screamo movement, so he has shown me a few new things over the years. In fact, since he was the first person to ever say the word screamo, I thought for sure he had invented the name for this genre.

So when he is passionate about some music...I know this is the real deal. It's like an air-raid siren going off!

Granted: I already knew about the Faint. He introduced me to Danse Macabre some time in 2001, and I remember thinking...he's slipping! Well, let me explain...

I have been DJing for about a decade now. The Faint are a dance-punk/new wave/electro band. I was on the cutting edge of electronic music and playing electro style records since the mid 90s, and I mean the original electro was popular in the early 80s, so I felt like this was nothing THAT new or amazing. I already had some records in that same vein that would truly blow his mind.

But Danse Macabre was good! I would listen to it a lot, epecially impressed with the track Glass Danse. It wasn't until maybe a few months ago that I realized there was a remix album for Danse Macabre! Here I found some of my favorite DJs getting in on the remixing! Junior Sanchez, This White Duke, Photek, Tommie Sunshine! 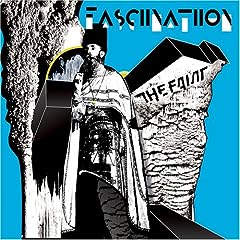 "There is a new album?" I say, eyes peering over my book to the bed on the other side of the room.

"Yeah...August 8th, it's awesome. I can't stop listening to it. I listened to it the whole way here non stop." That was a 9 hour plane ride...and this kid doesn't exaggerate. He continues, "I'll let you borrow my iPod later so you can check it out. But right now I haven't gotten enough of it." He then puts back in his earbuds, and I don't hear a peep from him until he is snoring loudly 2 hours later.

Apparently he never got enough of it. It wasn't until I got back to the States that I even got to listen to the The Faint's new album Fasciinatiion.

And I loved it instantly! It's so damn good. It blows my mind that some kids from Nebraska could come up with something like this! They even broke off from their label and produced this independantly! DIY ethos!

No official remix album in the works yet, but hypem.com is filled with unofficial remixes of just about everyone's favorite track: The Geeks Were Right. But for you, the original:

...and my favorite remix so far of this single:

[Download The Faint - The Geeks Were Right (DIOY,Y? Remix)]

so now all you have left to do is buy the album...and you get to sleep well knowing that your money is going to the band and not some bullshit label executive.