If they catch us, and dispatch us to our separate work camps...

It's possible you've heard of the band Say Anything by now. Their release "Alive With the Glory of Love" enjoyed some decent circulation on TV Shows and throughout video channels, such as FuseTV. "Wow, I Can Get Sexual Too" was an instant teenage sensation since it repeated the thrillingly provocative "called her on the phone and she touched herself" line, not to mention an appearance by Henry Winkler in the video. If you missed these, maybe you heard "Baby Girl, I'm A Blur" which did receive national airplay.
Here is one of my favorite tracks from their first major abum, "...Is A Real Boy". Check out "I Want To Know Your Plans":


"You don't think I'd say those words to you today?"

This blog is being written because I want you to meet the Say Anything from before "...Is A Real Boy" or "In Defense of the Genre". You see, the band as a whole and their songs are very special to me and I am missing someone quite a bit right now. The day this blog goes live will hopefully be the day I get to see that person again. The way we had to go about discovering the band, tracking down early recordings, and what we went through to finally see them live makes it all the more important.

As I write this blog I am listening to some of these old tracks, and this is what I hear:
It's always been for you
I sing every song for you
And every single day I'm falling down
I never want to say you're mine "right now"
A tear rolls down your cheek, it hits the ground
I'm falling down 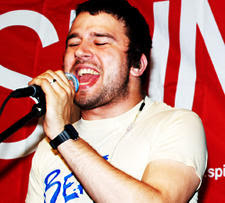 Max Bemis is the lead singer and songwriter of the band. He began penning tunes after a bad breakup in the year 2000, and fortunately for us, at least a hundred (and counting) articulately written songs about love, loss, society, school, the music scene, and hypocrisy followed.

Unfortunately, Bemis' past decade has been full of ups and downs related to his mental disorder. At least one tour has been cancelled as a result of his paranoid delusions, quite possibly stemming from his decision to replace prescribed meds for Bipolar Disorder with illegal drugs. But a string of successful tours (currently on Warped Tour) and recordings have followed those harrowing times and Bemis and Co. are working on not only recording another Say Anything album, but several side projects with well-known industry pals as well.

It's still difficult to find these earlier recordings on standard music purchase sites. But there is plenty to find on P2P sites. I suggest you check it out... Or purchase their new albums below.

On the EP "Menora/Majora" in 2002, Say Anything recorded one of my favorite tracks, and one that thankful fans were overjoyed to hear played live on the last tour. Please enjoy "A Walk Through Hell":


Even earlier still, the band produced a self-released album called "Baseball". Now tell me, whatever happened to the rock and roll in your eyes? Check out "Shameless":


It didn't kill me to be shameless. Is anyone getting a toothache from this post yet?

If you're not sappy like I am and you enjoy witty observations of society, there is still plenty for you in the music of Say Anything. Throughout all their albums, they've been able to convey distaste and disillusionment, whether through the use of metaphor or an outright calling-out such as in the track "Admit It!" off "...Is A Real Boy". But until then, the video that still gives me chills: Watch "Alive With The Glory of Love":

All this time... It's my favorite pastime, chasing after you.

Email ThisBlogThis!Share to TwitterShare to FacebookShare to Pinterest
Labels: glory of love, max bemis, saves the day, say anything