I needed to do that dumb intentional misspelling. Just to be oddly poignant. Because let's be honest, spelling words "EVAR" of "TEH FUNNAY" could be one of the dumbest things ever. If you do it? You should be locked up in a room with Robert Downey, Jr., and have a bag of coke thrown on you. Good luck surviving that.

But that's a total sidetrack. Here I just wanted to discuss the best soundtrack ever. No, it doesn't feature anything by Bette Midler. I know you're disappointed. In all honesty, if you're a fan of Bette Midler, I'd have to question your overall character. Hey, to each their own, I guess. Sorry. The sarcasm is flowing like PBR off tap into my mouth today. 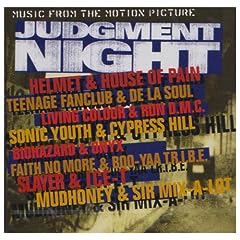 So for the honors of best soundtrack? No offense to Trainspotting's wonderful soundtrack, but this flick holds it down. Which movie? Why, it's one of the more underrated ones, in my opinion. Judgment Night features Denis Leary and his band of merry thugsters. They chase Emilio Estevez, Cuba Gooding, Jr., and Jeremy Piven through the rough streets of a full on ghetto and it makes for a pretty good flick.

The best part is the soundtrack. It features hip-hop artists - circa 1993 - with alt-rock and metal bands. The listing of tracks is as follows:

So now I guess I should give you the best part - the music! So here are two tracks from the movie. "Disorder" - by Ice-T and Slayer - is one incredibly angry tune! But if this doesn't make you get fired up and breaking stuff, then you need a therapist. Because all of that pent up anger inside just does you no good. For real. The other one I've chosen is on the other side of the emotional spectrum. Del Tha Funkee Homosapien is part of the Hieroglyphics crew. It consists of other hip-hop artists from the Bay Area such as Souls of Mischief and Casual. He's teamed up here with Lou Barlow's Dinosaur, Jr. for a really mellow jam called "Missing Link". Well, in comparison to "Disorder", that is.

And again, please buy it if you like it! In this case, either the movie or soundtrack will do. They're both worth it!