The more I hang around you, the more hang-ups I get

I know you're an angel, and you could never stay true.

It confounds me that Brand New doesn't have wider acclaim. I sat in a bar one night discussing my juke box choices with some random guy. One of Brand New's songs was playing and he kept asking me who it was. It was almost like the "Pete and Repeat" joke.

The band Brand New is made up of lead vocalist, guitarist, and lyricist Jesse Lacey, guitarist Vincent Accardi, bassist Garrett Tierney, and drummer Brian Lane. This group hails from Long Island, New York and now in their mid- to late-20's, they have been together since they were in their late teens. 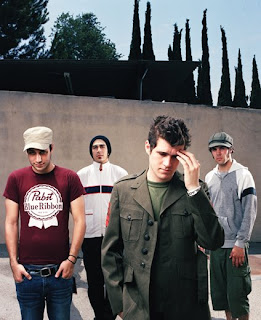 Controversy and what felt like insider drama surrounded one of the band's earliest recorded songs, "Seventy Times 7." Fans as young as the band itself loved this idea that a former bandmate had stolen Lacey's girl and that he recorded a song with such darts and arrows as "everyone's caught onto everything you do"; "don't apologize, hope you choke and die"; and "you're as subtle as a brick in the small of my back." Concertgoers love these angst-ridden battle cries that they can chant as they jump up and down in the crowd.

Of course this was further incited when said former bandmate wrote a response song and recorded it with his new band, but rather than go into that I will point out that all parties have since moved on and made up. Still, "Seventy Times 7" remained one of the most requested songs at shows, something frontman Jesse Lacey grew tired of quickly and alienated many fans at various performances.

It's easy to get zealous about Brand New. The lyrics and music throttle you and leave you stunned. I get continually blown away at how expertly crafted these songs are and how much they move me. I feel them in my core.

Who do you carry that torch for my young man?
Do you believe in anything?
Do you carry it around just to burn things down?

In reference to the last album, "The Devil And God Are Raging Inside Me", Lacey was asked where he gets the ideas for his songs:

"I get ideas from books, and also one of my best friends Kevin Devine. I asked him what he wanted to hear about, as I like to find out what he is writing about too. Some of the lyrics are simply direct responses to some of the questions he asked me. Others are from events. One song on the new album is written about a young girl who died in a horrific car accident, so there’s important stuff too." (By the way, that song is "Limousine", Track 5.)

I was fortunate enough to catch Kevin Devine on his first tour with Brand New, where they brought along a little band called Manchester Orchestra too. That was one of the most legendary of tours, with fans - this time to Lacey's presumed delight - demanding more. Consequently, Devine and Lacey went on acoustic tours, and the lead singer of Manchester Orchestra, Andy Hull, also shared some dates with one or both. Those three are some of the most intelligent, intuitive songwriters of our time.

Then there are some of the most intriguing song titles: biblical references, poems you learned in grade school, comments made by the writer's father, and funny stories from good times with friends (just to cover a few.) "Play Crack The Sky" comes from a heckle Lacey and friend John Nolan shouted at a former Christian Metal Rock artist the two had listened to in their younger years. This song is one of the most amazing, colorful, poetic love songs of all time. As a fan of the ultimate metaphor, especially in love songs, I would challenge that this song blows "Losing My Religion" quite literally, pardon the pun (listen to the song), out of the water.

If Kevin and Jesse come through your town this summer, be sure to catch them. (Speaking of which, what do I need to do to snare tix to the sold-out show at the Roxy this month?) When the tour wraps, Brand New will go back to work on a new album but the collaboration with Devine will not be finished: On March 21, 2008, Alternative Press reported that Brand New started their own record label, named Procrastinate! Music Traitors. The first act signed to the new label was none other than Kevin Devine himself, and the first release will be a reissue of the 2006 Kevin Devine album Put Your Ghost To Rest.

Click to play the acoustic version of "Jesus Christ", as performed by Kevin Devine and Jesse Lacey.

Of the few radio releases Brand New has put out, Jesus Christ may have received the most airplay and charted the highest. It's an intense, complex introspection of one's faith. So Says I. Lacey's songs surely reflect the extensive Bible training he received as a child but their interpretations are possibly to be left up to the listener.

I know you're coming in the night like a thief, but I've had some time alone to hone my lying technique.

You might never get the same answer twice when quizzing him about song meanings. And really, should you? Should each song be definitively ABOUT one thing or the other? Certainly an artist can say "I wrote it while watching a child climb a tree and was inspired by that" but once the artist has shared the art... This is where it flourishes and can morph as well. Throughout all of the Brand New albums, you will find songs that will encourage you to hate life, love life, leave your lover, stay forever, and generally see things in ways you never thought you otherwise might have.