...is both a warning delivered and a promise kept.

“One Day As A Lion is both a warning delivered and a promise kept.” 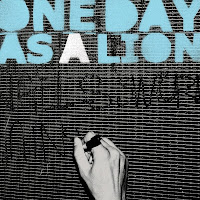 “A defiant affirmation of the possibilities that exist in the space between kick and snare. It’s a sonic reflection of the visceral tension between a picturesque fabricated cultural landscape, and the brutal socioeconomic realities it attempts to mask. One Day As A Lion is a recorded interaction between Zack de la Rocha and Jon Theodore from Los Angeles, California.”

“The name taken from the infamous 1970 black and white, captured by legendary Chicano photographer George Rodriguez featuring a center framed tag on a white wall in an unspecified section of Boyle Heights. It reads: ‘It’s better to live one day as a lion, than a thousand years as a lamb.’ This record is a stripped down attempt to realize this sentiment in sound.”

Now that we got all that label/propaganda shit outta the way...lemme drop some knowledge:

First off...most of you know de la Rocha...but do you know who Jon Theodore is? He is a former member/drummer of The Mars Volta. He's just as important to this release as de la Rocha. Why? My good friend Mike sums it up perfectly:

"That's a hell of a song, I was always worried how he would sound without Tom Morello. Morello is so unique."

Exactly. But I would have a hard time finding a band that was filled with more unique musicians/artists than The Mars Volta. This is why this album is so exciting: the combination of these two minds. I cannot wait for this EP to drop. But I am a Rage Against the Machine fan, from the very first album. When most of their poser fans were listening to Right Said Fred and Boys II Men... I was screaming "Freedom...yeeeaaahhh!" out the window of a white Chrysler K-car. /giggle

On October 18, 2000 upon hearing de la Rocha's announcement to leave the band, I thought I had missed, forever, the opportunity to see RATM live in concert.

Seven long years later and I remember I had to change my shorts after seeing the lineup for Vegoose 2007!

I was able to witness the greatest concert of my life. OF MY LIFE. Vegoose... Second night... Rage was set to close the Festival. This was a Big. Deal. After the breakup they had become the very shitty Audioslave, and I think de la Rocha had become a Zapatista in the Mexican Revolution.

It was everything I expected and more. I ran into the crowd to get as close as I could manage when the band took the stage. It was incredible. (I have a live recording if you don't believe me...) Someone set fire to a pile of trash and fans began dancing around the bonfire. We all collectively lost our minds. I even got emotional half way through the set. I wanted to cry/fight/make a change, but I didn't know how. When the show wrapped I realized something: looking around at all the the faces with eyes cast toward the now empty stage, shifting their weight uncomfortably... I wasn't The Only One. We need Rage more than ever. The music means as much today as it ever did.

I am ready for a revolution. Are you?


This is what all the rumors we heard about, off and on for years, had promised us. "de la Rocha solo album?" It's here. And it sounds dope.


Let me just end this post with one of my FAVORITE de la Rocha statements of all time. I'll remind you that this was just after Fox News misquoted his speech at Coachella:

"A couple of months ago, those fascist motherfuckers at the Fox News Network attempted to pin this band into a corner by suggesting that we said that the president should be assassinated. Nah, what we said was that he should be brought to trial as war criminal and hung and shot. THAT'S what we said. And we don't back away from the position because the real assassinator is Bush and Cheney and the whole administration for the lives they have destroyed here and in Iraq. They're the ones. And what they refused to air which was far more provocative in my mind and in the minds of my bandmates is this: this system has become so brutal and vicious and cruel that it needs to start wars and profit from the destruction around the world in order to survive as a world power. THAT's what we said. And we refuse not to stand up, we refuse to back down from that position.."

Email ThisBlogThis!Share to TwitterShare to FacebookShare to Pinterest
Labels: a thousand years as a lamb, one day as a lion, RATM

Thanks for the mention.

The more I listen to this track the more I'm loving the raw 'unproduced' feel it has.

There is some serious potential in this collaboration and I can't wait to hear more.

I'm digging this blog too. Keep up the good work.

Thanks Mike! I am too...I've had an opportunity to listen to the whole EP, and i recommend the purchase once it's released!