If I could choose my own name, I'd choose something that's bold and fits

Like anger, aggression, or cunningly brash by the skin of my teeth but with timing and class

I recently almost missed the concert of a punk band known for their dark lyrics about depression, alcoholism, and death. But I wouldn't have missed much.

I wanted to see Alkaline Trio for one reason only: they were influential in the musical development of a little band called Bayside. You see, in crossing the bridge before even getting to it, I actually found a band much more talented than its predecessors.

I know that the boys in Bayside themselves will disagree. But for me, Alk3 never resonated because they just didn't get close enough to my core. And between Anthony Raneri's lyrics and the band's strong notes, chords, and drumbeats that match the way the blood pumps through my own veins... Bayside tells the painful and self-loathing tales the way they should be told.

The first album I heard was actually their second release with Vagrant Records, the self-titled Bayside. The first track is called "Hello Shitty" and right out of the gate this song eloquently expands on the offensive greeting conveyed in the title. By the time I got to well-placed track 4, "They Look Like Strong Hands" (for those keeping score, how many times will that movie be referenced in this genre?!) I knew this band had won my heart forever. 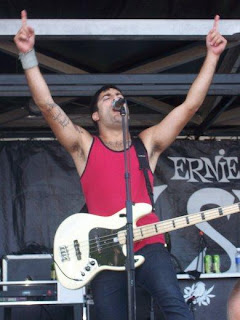 Throughout each song, you understand someone who makes mistakes, finds faults in self and others, gets angry about it, eloquently points it out, and grows (oh, and I'm so proud of where I am: I'm learning where to stand or to tread lightly). It's beautiful. It is a beautiful thing. 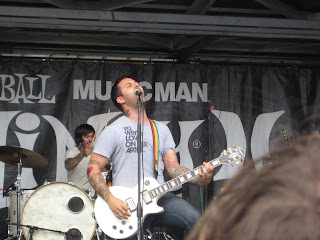 This band's live performances are memorable as well. Why the venue was packed to the rafters for Alk3 when they have no stage presence, I don't know. Each member of this fourpiece pours his blood sweat and tears into the show. They are visibly enjoying themselves and enjoying each other. They are PLAYING MUSIC.

Bayside is drummer Chris Guglielmo, bassist Nick Ghanbarian, lead guitarist Jack O'Shea, and guitarist/lead vocalist Anthony Raneri. Early in the band's history, their original drummer was killed in an accident that involved the entire band. They released the next album as an Acoustic and recorded the song "Winter", which is one of the best songs I've ever heard that takes death and loss and addresses it with innocence and simplicity. Should we still set his place? Should we still save his chair? Should we still buy him gifts, and if we don't did we not care? 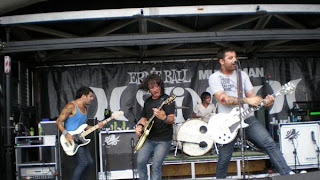 Bayside is a juggernaut that continues to tour and record and blow minds with music and lyrics alike. The Gold Edition of their last album, The Walking Wounded, was recently released and their next album, Shudder, is slated for release at the end of September. Check out the band's myspace page where they diligently update with blogs, links, twitters, videos, and tracks.

I was always there. You just never knew where.