You're an Angel. And your words cause little earthquakes.

When words move you so much...

Damien Rice said "still a little bit of your words I long to hear..."

Chris Carraba said "...but I believe in you so much, I could die from the words that you say."

I even wrote a poem myself once, about the words that fall from the mouth of someone very important to me. Can you imagine being told your words cause little earthquakes? I think that is the song ("Thank You") that had me hooked and smitten with The Little Heroes. I've been listening to them for a few seasons now and they are definitely a band you want to get into. Hopefully their second album will start the recording process this fall.

It's very moving to me when a punk song can be a love song. When a punk band can turn into a folk band. When a love song can be about a lover, or a child, or a parent. And I think that's what does it for me with TLH. It feels like all of that. Check out "Thank You": 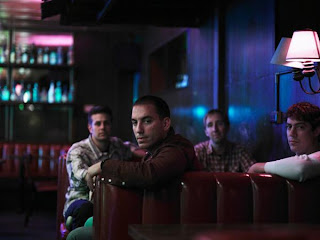 The lyrics and the way they are delivered are so earnest, it reminds me of Jack Johnson and makes me wonder if they actually do it better. "I hold you, you hold your breath."


I hope the boys don't mind that I stole this pic from their myspace page.


The band was created by bassist Trevor Pawlewicz and guitarist Jon Miller (who also plays keyboard on many tracks) and in fact, that duo did originally form a punk band in high school and toured with such acts as Built To Spill, At The Drive In, and another one of my favorites, Less Than Jake. Miller can be credited with keeping the momentum going, recruiting drummer Adam Caldwell from a band they played in together and later reuniting with Pawlewicz. Once they found lead singer James Lombardo, the songs were brought to life with his soulful voice.


It was late 2006 when their single "September Falls" got college radio airplay, which they supported with a west coast tour. By the time spring of 2007 had turned to summer, they had been a featured "free download" on different sites and were able to brag about being featured on MTV reality shows. The Little Heroes have definitely done a lot of pulling themselves up by their own bootstraps and seem to be loving every step of the journey.

"Cinematic Americana" is the name of the album, put out by indie label Wednesday Records. I want you to buy it today... Click here right now!

Speaking of MTV, despite the band's apparent lack of a music video (so far), someone in production over there is definitely a fan. The song "New End Game" played recently during the MTV Movie Awards (as Ellen page accepted her golden popcorn.) Check it out here.


Download The Little Heroes - New End Game
Posted by The Little One at 2:03 PM