Somewhere comfortably between FEAR and LOATHING

Raindrops on roses
And whiskers on kittens

These are a few
Of my favorite things...

We were somewhere around the
Rio Hotel and Casino, on the edge of the Strip...


when the drugs began to take hold...

My lawyer and I descended upon the Voodoo Beach pool to partake in some debauchery. Well. A free show hosted by Area 107.9, Fosters, and SpyOnVegas.

"What are we doing here?" said my attorney, after vomiting out the window of the white Cadillac convertible we had rented for the trip.

"We are meeting the Presidents of the United States of America." I replied while frantically trying to locate the salt shaker that had rolled under the seat. "I'm sure they wanted a Doctor of Journalism at the event so that it can be properly covered."

We scampered through the casino, trying to figure out where they put the godforsaken pool. I had to fight off the impending FEAR and resort to speaking to a security guard for directions while my attorney whispered in my ear: "Ignore this terrible drug..."

Finally! The pool at last! It was hot. I was pouring sweat.

My blood is too thick for Nevada.

I've never been able to properly explain myself in this climate.

"We must find beer!" I shouted to my attorney.

We shuffled through to the cabanas...luckily our press credentials allowed us to sneak into the Area 107.9 tents to consume a half dozen cold Fosters while we waited for the clock to strike 9PM. Show time.

At 9:05PM we took our place among the deranged and drunken crowd in front of the stage. It was like being in the middle of a reptile zoo!

Apparently you can save some money, and not provide an opening band, if you give the people 10 beach balls to play with. Luckily I am an expert at dodging beach balls. But wait! Something not bouncy, not buoyant, and quite disturbing suddenly hit my leg. I turned to my Cuban attorney, "What is that? Someone just threw that at me! Was it intentional? An accident? My god man, what is it?"

We both bent down to examine the object. It looked like a frisbee sized piece of sod that someone must have ripped from the lawn in a drug-fueled rage and flung into the air.

"Get rid of it man! It's bringing me down!" I shouted to my attorney.

He grabbed the offending chunk of grass and flung it toward the pool while muttering, "I mean, what is going on in this country..?"

Finally a representative of the radio station came on stage to lead the crowd in the reciting of the Pledge of Allegiance before POTUS took the stage. They opened with Tiki God, a good choice considering the surroundings.

The trio rocked out many songs, a nice set list derived from gems off all their albums. I wish I could tell you what the encore was like...but my short term memory is shot. 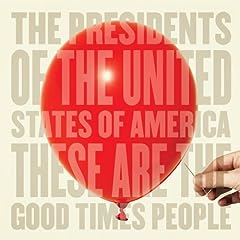 I was torn about what MP3 to provide you all with. There is much to choose from. I mean...6 albums people! But in the end...I present you with the last song on the latest CD. How's that for a deep cut! The song is called “Deleter,” a song that is very different than any song I have ever heard on a President's Album. This song has horns and a bona fide soul singer. It's true! Fysah Thomas joins Chris on vocals to be the very first guest appearance on any POTUS record!

The whole record is great actually...you could not go wrong by purchasing "These Are The Good Times People". It rocks. It's catchy! It makes me wanna boogie! It makes me wanna crank it by the pool while drinking sangria. You will want to sing along. You will smile while you do. I know I get smiled at when I get to crooning "Ladybug." Try it and let me know what happens to you!


Download Presidents Of The United States - Deleter
Posted by mookie at 4:20 AM